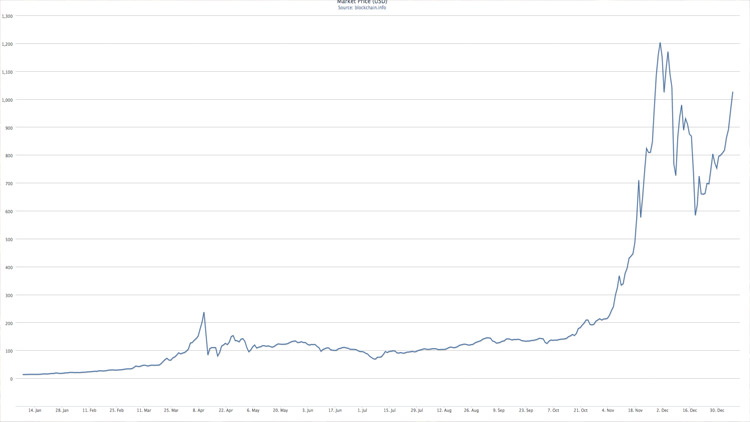 The price for a single Bitcoin has breached the £620 mark for a second time on the popular exchange platform, Mt. Gox.

Bitcoin reached the £620 price at approximately 8:30am Greenwich Mean Time (GMT) and 3:30 Eastern Standard Time(EST) if you’re across the pond.

We first witnessed a similar rise last November when the Chinese were investing heavily in the digital currency. However shortly after the rise it crashed as quickly as it rose due to China’s central bank imposing several legal restrictions on the digital currency. They ultimately denied third-party payment processors and financial institutions from handling Bitcoin.

Despite repeated crackdowns by the Chinese authorities which crashed the market by more than 50%, the most popular Chinese exchanges are still pushing high trading volumes suggesting a legal loophole in deposits for the time being.

At the time of writing nearly 70% of the Bitcoin market share is taking place on exchanges such as BTC China and Huobi, with the remaining spread across USD and several other currencies.

Due to the unknown situation in China regarding deposits via bank transfers the price may have fluctuated due to a workaround imposed by the Huobi exchange.

A rumour started in the popular Bitcoin Reddit section which pointed towards the CEO of Huobi accepting deposits through his personal bank account to avoid the imposed restricts.

The main concern in this scenario is how long the loophole will remain active and will it ultimately result in the authorities shutting down trade causing further cataclysmic price crashes.

When the price crashed to around £250 between December 17th to 19th, it not only affected Chinese trade which is now recovering but also mainstream development and currency adoption. Below are some of the milestones which could of caused increased the volatility of the recent crashes: