Over the last few days rumours have been circulating across social media and various crypto publications suggesting ProtonMail are exploring the idea of Initial Coin Offerings to raise funds for their project ProtonCoin.

These rumours were based on the firm registering the domain name ProtonCoin.com back in 2017 and more recently the launch of the website last month.

The website ProtonCoin.com says it wants to fulfill several goals, some of which include enabling the public to participate in the growth of ProtonMail, increase privacy and security and decentralise the organisation.

ProtonMail surprisingly quashed the rumours via a Reddit post on the official Subreddit saying they were “unsubstantiated” and “have made no announcements on this topic”. They also went on to also confirm that the domain ProtonCoin.com was owned by them.

The post further explains that ProtonMail has registered multiple domains to protect their trademark and it should not be taken literally or suggest that they are signalling an immediate ICO launch.

Despite this clarification the Reddit post still leaves many questions unanswered. On one hand you have a ProtonMail owned website that is explaining the benefits of implementing blockchain technology whilst on the other an official statement that downplays this message.

It gets even more confusing reading the questions and responses on the Reddit post, as it has been uncovered that ProtonMail recently posted that they have sought advice from the Swiss government on tokenising the company stock, specifically on the blockchain (also known as equity crowdfunding) not a traditional ICO. 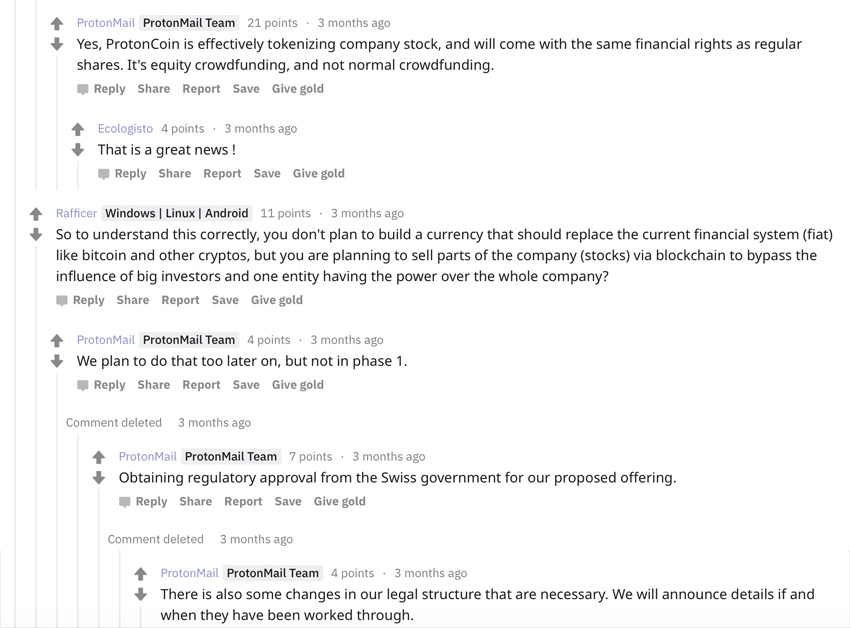 Despite dabbling in the benefits of blockchain technology and funding avenues it seems nothing is certain at the moment and ProtonMail are not ready to go public with their blockchain related endeavours, if any.

Encrypted email service @ProtonMail confirms it is ‘considering’ an ICO ‘within the year’https://t.co/sAJ9kEY6yg