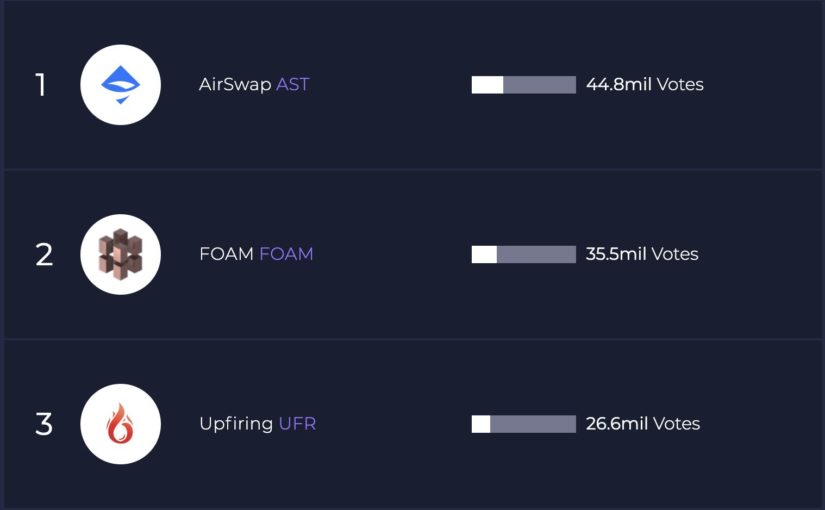 Upfiring, FOAM and AirSwap have won the latest ETHFinex community vote and will shortly be listed on the trading platform.

The community backed ERC20 trading platform, ETHFinex announced the winning projects via Twitter and are expected to be listed this month.

The majority of projects listed on ETHFinex also go on to be included in the main Bitfinex exchange.

All EVT has now expired and the winning tokens will be listed on Ethfinex in the coming days ? pic.twitter.com/ZOKVz1DHRa

Mostly surprisingly of all, Upfiring a P2P file-sharing dApp running on the Ethereum Blockchain secured 26.6 million votes beating major VC backed projects. The team and community behind the dApp celebrated the win on Telegram, with the mostly unknown project set to be exposed to millions of traders, investors and new users.

Unlike competitors such as Tron’s tokenization of BitTorrent, the project stuck to it’s roadmap and has long had a fully working dApp.

Coming in at second place with 35.5 million votes, FOAM the ‘Proof of Location’ protocol for geospatial data markets” allows users to build a consensus driven, trusted map of the world by securing physical space on the blockchain.

As history often repeats, all three projects will most likely be listed on the BitFinex exchange in the near future.