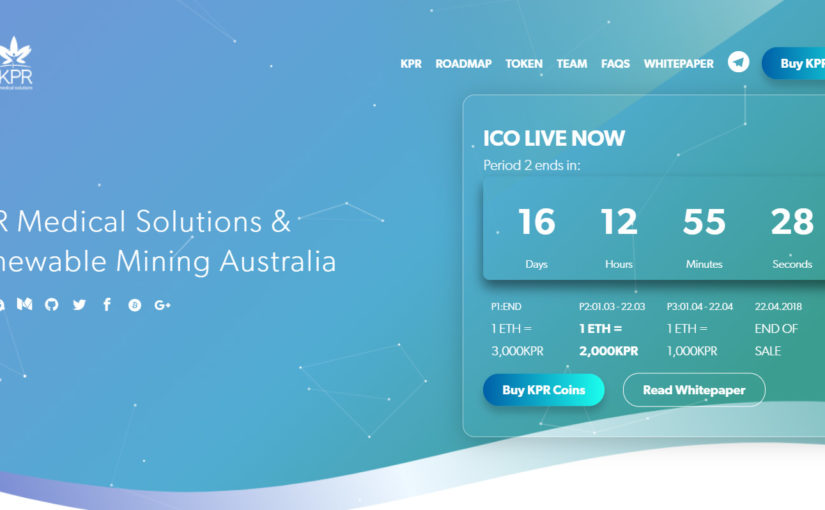 Mining, in the most simple words, is the consumption of electricity to solve a complex mathematical algorithm. Groups of computer work together to mine for cryptocurrencies and use their collective computing and electric powers to solve these algorithms. When all the computers reach a consensus, the mining activity is completed and new cryptocurrencies are generated and distributed among the miners. There have been a number of developments in the way the world of technology has been adapting to cryptocurrencies and mining too is evolving with time.

KPR Medical Solutions intends to become a leader in Australia’s medical marijuana supply. Together, RMA and KPRMS have now launched an Initial Coin Offering  which will help KPRMS get investors for their KPR Coin. The company aims at raising a total of $30 Million in Ethereum investments from interested investors. Details of this Initial Coin Offering can be seen in detail here: https://www.kprms.com/

With the $30 Million that the companies raise, they intend to acquire the land needed to start off with the medical marijuana growth. Moreover, the company also intends to set up a mining Bitcoin operation with the help of RMA, which will be setting up a number of Antminer S9 ASIC machines in the mining farms. These Bitcoin generated here will be given away as a reward to some VIP investors, and will also be used to make this farming operation self-sustainable.

BM Radar is launching the wallet for BMT tokens
Belarus: Cryptocurrencies and ICOs Are Legal Now
Blockchain Technology Breathes More Life unto a Stagnating Filmmaking Industry
Automation and Control Technology Innovator Robotina Starts ICO Presale, Looks to be a Gamechanger i...
OSA DC  - The Agnostic Savior of Retail Industry
Blockchain Rendering Startup Out Paces Its Competitors in Early Benchmark Tests
Argyle Coin Becomes the First Cryptocurrency Ever to be backed by a Performance Bond and Fancy Color...
Legal? The Future of Cryptocurrency and the Law