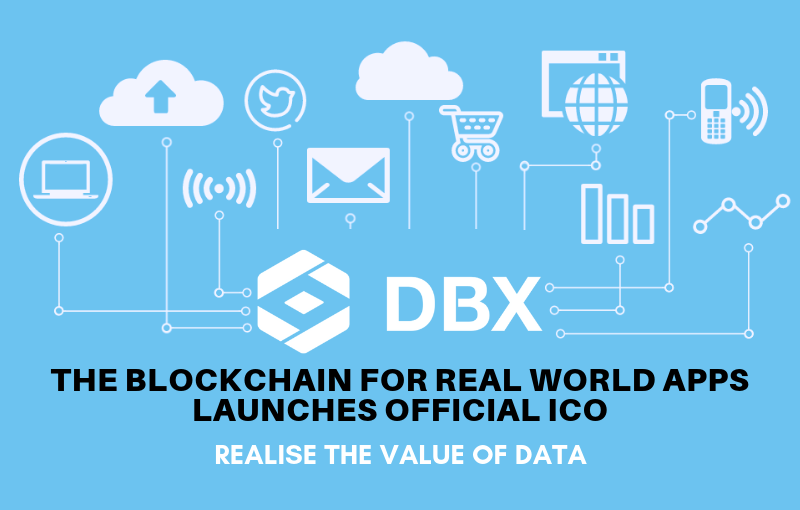 September 24th, 2018, Singapore – The technology company that’s leveraging Blockchain to build applications and businesses with transparency and control of data in its core, begins ICO.

DBX made headlines this week with the announcement of their ICO launch that is expected to shake up the Blockchain ecosystem. The ICO, which is now open, intends to help DBX expand its operations and help businesses utilise blockchain in a workable and “real life” manner. DBX, or Database X, has been described as a fundamental breakthrough in the rollout or usage of blockchain for more businesses.

DBX is unique from other ICOs by the fact that before ICOs began, DBX had already completed:

More integration of third-party DApps from different industries have already been confirmed, including DApps with over 1 billion USD in annual transactions and a DApp with business in over 400,000 supermarkets globally. Prior to the ICO, the DBX founding team members had invested over $ 530,000 and had raised 5,100 ETH in private funding.

DBXChain’s data ecosystem, built on blockchain, is designed for the big data era. The primary mission is to build a highly efficient and safe blockchain network, which encourages strengthened data exchange, and data value mining. The main hindrances of data exchange currently are data wastage, data islands, data scattering, and supply versus demand imbalance. To solve these problems, DBXChain offers a demand oriented, structured community network to serve as a safe,  efficient, traceable, connected and deeply useable data trading platform, suitable for data exchange and decentralization. While blockchain to date has been revolutionary, it is limited in terms of real world applications. This is where DBXChain is unique, as it is designed for real world purposes.

DBX (Database X) is a value-based ecosystem of data built on blockchain. It is a decentralized community for exploring and exchanging valuable data. It utilises a huge amount of “useless” data to achieve great value by making a correlation with demand which was previously undiscovered. This enables every participant in the community to acquire data with higher efficiency, lower cost and fairer trading. All data is, of course, accessed with the users consent. DBX put a huge emphasis on safe data and data protection. Users even have an option of monetising their own data, with a unique revenue sharing model.

DBX launched in 2016 and have since developed their own blockchain which aims to improve the now outmoded blockchain. DBXChain’s main business is data infrastructure that releases data’s value and “atomizes” data transactions. Data connections, that were not previously able to release value, have been made possible by this new blockchain operation system. As a result, this opens up blockchain to far more “real world” relevance than has previously been possible.

At the end of 2016, Tomi Wen, the founder of DBXChain, chose to get into the blockchain market by working on the underlying system of public chain and data infrastructure in the blockchain world. Tomi Wen holds a bachelor’s degree from Renmin University, and is a tech geek. He developed a software DIY-Page at age 15 and became “the software author that made Baidu change its algorithm”.

BLOCKCHAIN FOR THE MASSES: NEW TOKEN SALE FROM BCDC TARGETING INVESTORS WHO WANT TO MAKE TANGIBLE CH...
CanYa will completely change the world’s $2tn ‘gig economy’.
DomRaider Group Unveils the First Version of their Blockchain Based Auction Solution under the New B...
Parsec Frontiers Announces Start of Token Crowdsale Opening Way to Stars Colonization
KuCoin Listed 0x Protocol (ZRX) As One Of Their Promising Tokens
Global Blockchain Forum to Destroy Token Fest?
Do you have to understand blockchain to play in Bitcoin Casino
How Bitcoin Gamblers can benefit from current Bitcoin price rise