The world's first blockchain investment option in the oil and gas sector - CoinSpectator Blog
Skip to content
Follow @coinspectator Track the industry in real-time with our cryptocurrency news aggregator for monitoring analysis, sentiment and trends. 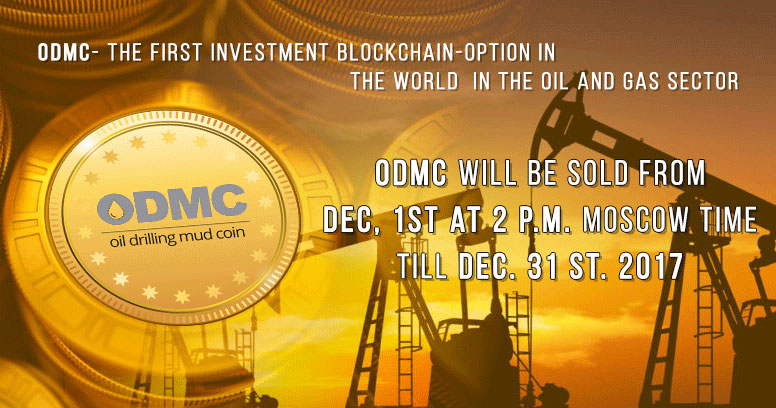 With the development of the blockchain technology and possibility of creating your own tokens and cryptocurrencies, there are many fields that want to improve their work by connecting to the blockchain. This technology is not only limited to computer programs, apps and platforms. ODMCoin project want to benefit from blockchain, while operating in an industrial area.

ODMCoin want to explore the oil and gas sector. The company will set up facilities for oil drilling mud, which is a mixture of both oil products and soil and ground particles. Over $1,000,000 was invested in research and development of technologies for processing these muds and extracting raw materials that can be used for building, electricity and fuel. Another distinctive feature is the development of unique process that lets recycle the mud right on the working side, without any need for special storage and transportation to recycling factories. Not only the project aims to just obtain these products, but it’s all done with the idea of clean and safe for environment improvements in industrial field. Usually, such companies care only about profits, while ODMC wants to introduce innovative production technology with ecological environment in mind.

It’s also worth noting, that this project’s whitepapers are very detailed, and explain from the technical but also easily understandable the whole process of drilling the mud and the technologies used for it. This for sure acts as a huge advantage and shows to the potential investors that ODMCoin know exactly what they are doing.

While we are at the environmental aspects of the project, ODMCoin want to be a part of the Clean Country project, which is a high priority Russia project, officially accepted and implemented by the government. But taking into consideration the problems with oil mud storage that other countries struggle with too, the project may become a solution of environmental issues in the whole world.

One of the main features and benefit for a token holder, will be a membership in a Blockchain Industrial Club, possibly the first of its kind, that will connect companies focused on revolutionizing the industrial business with the help of the blockchain technology. They will develop their own tokens, which will give a right to receive company’s profits. BIC is a platform to regulate the interaction among participants of the ODMCoin project and token holders and it mutual work on the development and prosperity of the project. As an advantage acts the fact that it is developed to make secure transactions with the help of smart contracts and escrow agents.

To strengthen the promise that the holder of the token, by supporting the project financially on the very early stages of the development, becomes also in a way a co-owner of the company. ODMC is taking it rather seriously and are ready to share the drilled products directly with the investor. Each investor has a possibility to receive the finished products like oil, gas or construction materials. This may encourage even big corporation, which are related to the trade of such products to invest in ODMC, leading to a very successful ICO phase.

ODMCoin will be Ethereum based, meaning you can store it with your other ICO coins in most of Ethereum wallets. It will be directly related to the drilling project and profits of the company, but also it’s worth noting that this token can be used to possibly bigger project, which is Blockchain Industrial Club, as BIC token also gives a right to receive 20% club profits and 80% from industrial company profits, which holder has a token for.
Also to maintain the prosperity of the token’s price, ODMCoin will buyback a particular amount every month.

The pre-ICO phase has already ended and turned out to be rather successful. ODMCoin have raised and met the goals they had set. These funds will be mainly used for the preparation of the final ICO phase, the whole marketing and PR campaigns and any other expenses of the early preparation stage. The main ICO phase stars on the 1st December, 2017 and will last a month, ending on the last day of 2017. With these funds, the team will be able to start fully developing the projects just from the very beginning of 2018.

ODMC team is Russian based. It especially focuses on specialists to deal with the management and technical side of the whole drill mining process. Also there are experienced international advisers, like Ludmila Golubkova (Managing partner of Starta Capital and Starta Capital Accessor Fund), supporting the team.

The project has an advantage of focusing on real assets and direct work. ODMCoin team seem to know a lot about the whole technical process of drilling and have the environment’s safety in mind at the same time.